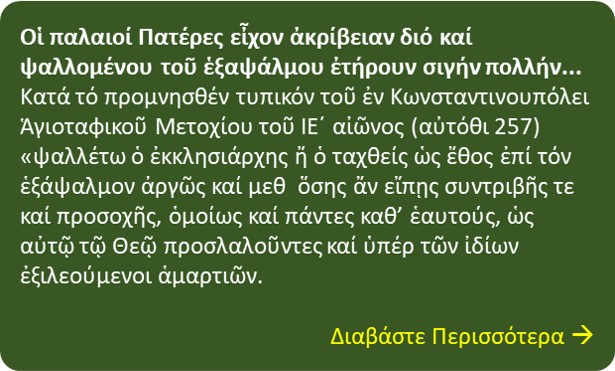 Deeply concerned about the unique situation of crisis experienced by our country and especially the Government’s intention to implement the law of e-governance and to issue as its tool the Greek e-ID card [“Karta tou Politi”],and taking into account the related government announcements, the undersigned priests, priest-monks and monks of the Orthodox Church of Greece, declare our refusal to receive this e-id for the following reasons:

1. Although we do not deny the creative help of digital technology in our interactions, in scientific research and in the immediate access to a wealth of information through the internet, etc., we consider the massive gathering of personal information and the formation of personal “profiles” through the interconnection of all databases very disturbing. The unique identification number for each person and the microchip embedded in the e-ID card will –according to IT specialists- render the card an inhuman electronic prison for anyone who possesses it. Things will become worse if its management is handed over to those power centers who are already exhausting and firing at the people of Greece through the economic crisis.

2. We are also alarmed by the capabilities of the RFID technology. The RFID chip embedded in the card enables the immediate interconnection of data bases and renders surveillance of the card-holder possible.

3. According to IT specialists, the entire e-governance system operates with the help of the three dividers , that we see on labels of commercial products, which correspond to the numbers 6 6 6. In any case, since -as is known- the microchip can be re-programmed, each authority will be able to reprogram the data contained at will. Thus, even if the ill-famed number 666 is not present in the original version of the card, it can be added later on.

Our opposition to receiving the e-ID, as illegal and unconstitutional, is magnified when we consider that:

Reputable lawyers prove that the imposition of the e-ID (“Karta tou Politi”) is against both the Greek Constitution and the European Law.

The acceleration of the procedures to implement the e-ID during a period of a constantly deepening economic crisis makes us suspect that the crisis was planned by the authoritarians, in order for our people to be battered and not to be able to resist the imposition of this card.

According to the information we have, the state representatives ate refusing –or at least are delaying- to give the technical characteristics of the Card to the IT professors who participate in the special committee of the Holy Synod.

The insistence of the state authorities to issue the e-ID Card gives birth to many questions about their relation to the raising threat of a New Age dictatorship, since our Prime Minister has declared that “we need Global Governance” .

Considering all the above, we declare:

Margins have narrowed for us as a Church to intervene in the lawless plans of the enemies of our freedom.         The carefully planned, seemingly objective consultations for the Greek e-ID Citizen’s Card (Karta tou Politi) are over. The Card and e-governance are at our doorstep. That is why we plead for your intervention, for your NO, in order to deter the overhanging danger.

Your firm stand, and the repentance of all of us –clergy, monks and laymen- will help so that the Holy Trinity may –once again in history- save our people from the forthcoming tyranny.

Asking for your Holy Prayers,

we respectfully kiss your right hand